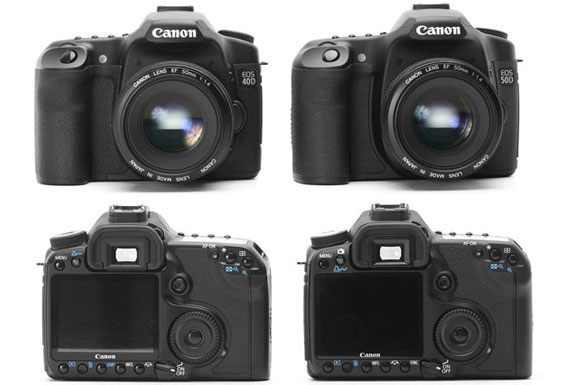 Being how both models are so excellent the question becomes: Which is the more excellent? Or, more accurately phrased: Is the 50D worth the extra $250~400 above what the 40D costs? Spot Cool Stuff compares the two Canons and provides the answer .
Camera Body Build & Design
In terms of look and feel, the Canon 40D and 50D are virtually identical. The bodies of each have the exact same dimensions, though the 50D weighs in at 822 grams (1.8 lbs) or a minuscule 14 grams lighter than the 40D. The 50D also has slightly better weatherization (including sensors that are more dust-resistant), an HDMI output jack, and a significantly more vibrant LCD display. (The 40D screen is a little hard to see in direct sunlight).

But the biggest design difference is one you can’t see or feel: The 50D will take approximately 800 shots on a single battery charge while the 40D will take a whopping 1,100. In other words, the newer 50D can only take 70% of the photos the 40D can on a single charge.

Camera Features
If Canon’s marketing is to be believed, the 50D’s most significant upgrade is its 15 megapixel sensor; the 40D’s sensor is 10 megapixel. Spot Cool Stuff, however, encourages you to ignore this difference. A photo taken at 15 megapixels isn’t any higher quality than one taken at 10 megapixels. Indeed, all those extra pixels can cause a photo to be of lower quality (see below). Above 6 megapixels the only thing more pixels really gets you is the ability to make a larger print. A10 megapixel shot, such as those taken by the 40D, can produce a full-resolution 13 x 19 inch (33 x 48 cm) print. Unless you want to make prints larger than that you’ll be fine megapixel-wise with the 40D. The 50D, however, does have some other features that the 40D does not. Here are some of them from most to least important (as judged by Spot Cool Stuff):

The 50D has more intuitive controls including a Quick Control screen that gives you access to the most frequently changed settings.

The 50D takes photos in a new sRAW format, or a RAW image that’s half the size of the full fledged RAW.

The 50D offers Lens Peripheral Illumination Correction. In other words, the 50D’s software makes sure that the lighting at the edges of your photo matches that in the middle.
is unlikely that you find any of those new features earth-shattering. Click here for the complete list of the feature differences between these two EOS models. 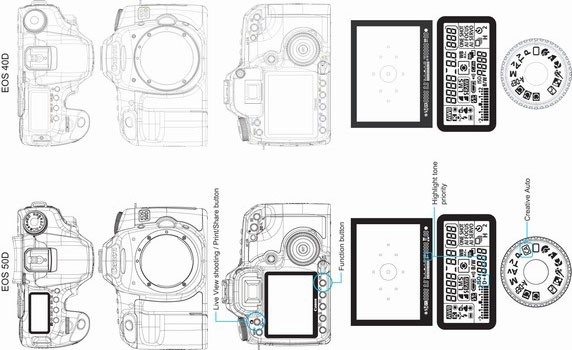 Photo Quality
The photos produced by both the Canon 40D and 50D are excellent, as good or better than any professional-amateur digital SLR currently on the market.

Photographers who have extensively used both cameras are divided on which produces the better images, though almost all would agree that the differences are slight. Some say the 50D’s more advanced processor produces the better result. Others say that the 50D’s photos are a little darker and less colorful. From our own use Spot Cool Stuff is ready to call it a tie. In normal conditions, the 40D and 50D take virtually identical photos.

It is in low light conditions where the differences become a little more apparent. At least to some eyes. While the 50D can work at higher ISOs than the 40D, the high-ISO performance of the 40D might be a bit better. To the extent this is true it is because the 50D has an additional 5 megapixels to process. Check out the difference for yourself . . .

. . . below are two photos taken under the most similar conditions possible. 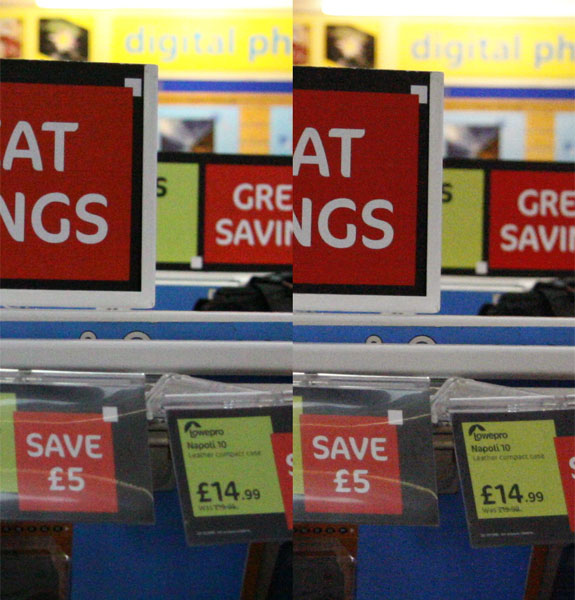 Both photos were taken at 3200 ISO, the speed at which the quality difference between the two cameras is greatest (and the photos are at their most noisy). If you can’t tell the difference, or don’t care about the difference, then consider the these two EOS cameras equally capable of taking great photos. Conclusion
So which camera should you buy? The Canon EOS 40D. Probably.

For most people there are not enough new features on the 50D to justify the extra expense. This is particularly true if you have a fixed budget for all your camera equipment. For you, it would be a far, FAR superior strategy to get the 40D and then put some of that savings into a higher quality lens. A good lens on a 40D will easily produce higher quality photos than an average lens on the 50D. Certainly, if you already own a 40D it is not worth upgrading to a 50D.

That said, there is one significant group for whom we would recommend the 50D. If you’ve never owned a digital SLR camera, are looking to get into SLR photography in a semi-serious way, and have enough money to purchase a decent lens for your camera then you’d be better off with the 50D. This is because the user controls on the 50D are significantly more intuitive and because, in auto mode, the 50D behaves more like the point-and-shoot you are used to than does the 40D.

Canon had a difficult job to do with the 50D. As usual, market pressures demanded higher performance, and rightly or wrongly (mostly wrongly), that's often measured by consumers by looking at the pixel count of the sensor. With the EOS 50D Canon have produced the highest pixel count APS-C sensor camera (though the Pentax K20D and Sony A350 are very close), so that should have pleased those who were complaining that the EOS 40D "only" has 10MP, which is now at the low end of the pixel count range for APS-C crop sensor DSLRs.

Of course you can't have everything and increasing the pixel count from 10MP to 15MP means that the pixels have to be 1/3 smaller (22 sq. microns vs. 33 sq. microns), and as we all know, smaller pixels typically mean higher noise levels, especially at high ISO settings. So Canon had their work cut out in trying to make a high pixel count sensor which retained high quality. While perhaps they were limited by the laws of physics from lowering sensor noise, nevertheless I think they did a pretty good job overall. Yes, the intrinsic noise of the sensor (RAW file with no noise reduction applied) is a little higher than that of the 40D sensor, but the resolution is higher too. However, looking a the bigger picture, by applying an appropriate degree of noise reduction (which does tend to reduce detail), the EOS 50D is capable of generating images which have both more detail and the same (or lower) level of observable noise than equivalent images from the EOS 40D.

The EOS 50D adds a number of features to those present on 40D, the most notable of which in my opinion is the microfocus adjustment ability. Given the number of complaints I see in web forums about lenses front and back focusing, this would seem to be a feature many photographers should be willing to give their right arm for, or at least if not their right arm at least a few hundred dollars! Personally I don't have any lenses which exhibit significant front or back focus, but if I did, I'd certainly want the microfocus adjustment ability of the EOS 50D.

The other new features of the EOS 50D such as the 920,000 pixel high resolution LCD and contrast detection focus in Live View are nice to have, though I wouldn't personally regard them as reason to upgrade from a 40D. Then again I don't use LiveView much myself and I don't use the LCD for critical image review.

ISO 6400 and ISO 12800 to the 50D add to the "bells and whistles" count of the EOS 50D. They're certainly nice to have and could be useful at times, but image quality does suffer quite a bit and ISO 12800 is something of an "emergency" setting. If you didn't really have to use it, you probably wouldn't want to. Still, you can't really complain too much about image quality at those ISO levels. Try doing it with film and see what the results look like! The surprising thing is that 4x6 prints at ISO 12800 actually aren't that bad.

The ultimate test of a camera for me is whether I'd want to own it, and I'd want to own the EOS 50D. If Canon came along and said they'd give me an EOS 50D in trade for my EOS 40D, I'd take them up on their offer without another thought. I think the EOS 50D is the better camera for 99+% of the work that I do. The 40D has a very slight advantage in frame rate (6.5 fps vs. 6.3 fps), uses slightly less memory because of the smaller file size and shows slightly lower noise in RAW files. Of course Canon is not likely to offer me a free exchange! I'm less certain that I'd do the trade if it cost me $600, which is about what it would actually cost if I sold my EOS 40D and bought a new EOS 50D. It's an easier decision if you have an EOS 20D or 30D (or even 10D). If I was on that upgrade path, I'd pay the extra $300 or so and go for the EOS 50D.